When Arrigo Sacchi was head coach of AC Milan back in the days, he frequently used an 10v5 drill (image above). The attacking team started with the ball at the half way line en tried to score against four defenders and a goal keeper. It seems easy, but it certainly wasn’t against Milan’s defense. They worked together so well they didn’t concede a lot of big chances.

When we visited AC Milan two years ago with our Dutch parent company De Voetbaltrainer, Stefano Nava, who was the coach of the Under 19 at the time, explained that Sacchi regularly used cords to improve the cooperation between the defenders. Nava: ‘The defenders moved forward, sideways and backwards depending on the body language of the coach. The next step was playing against five, six or seven attackers. Then, the number of attackers further increased.’

One thing that the coaches emphasized the most: the vertical movement of the back line. Recognizing the right moments to push up or to drop down, based on the location of the ball and the defensive pressure on the ball carrier and his body position. A useful rule of thumb is that the defensive line collectively drops when the ball carrier is capable of playing a through ball in behind. When he can’t do so, because he faces his own goal or a player from the defensive team presses him, the back line pushes up to decrease the mutual distance with the midfielders.

To be more specific, there are certain moments where the defenders can move forward together.

A very important aspect to dominate the space in front and in behind as a defensive line is the body position. Every player should be capable of sprinting forward or backwards at any time. When he is standing turned, facing the sideline and not the opposition goal keeper, he can turn faster and win valuable time. By moving the center of gravity towards the forefeet, he can also accelerate faster.

In the drill below, at Peter Bosz' Bayer Leverkusen, the defenders have to cooperate in a defensive block by pushing up and dropping down at the right moment (click to view). 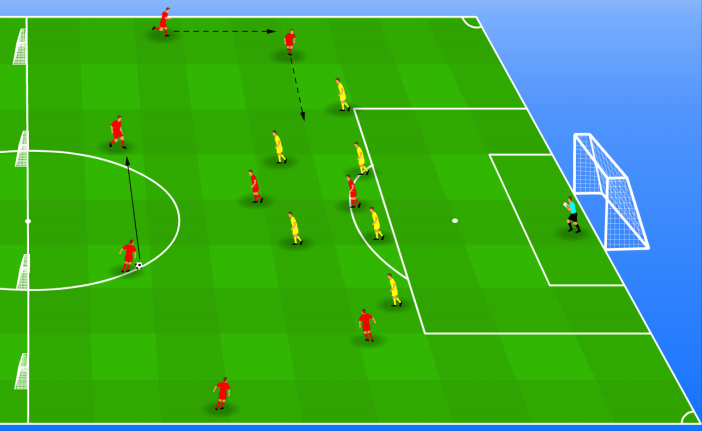